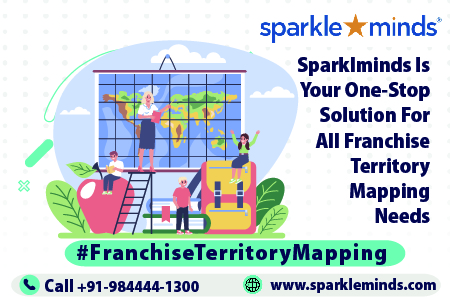 What is Franchise Territory Mapping India?

Franchise Territory Mapping India is one of the critical duties for any brand considering franchising in India.  Furthermore, they will gain a better understanding of the market. As a result of this, the brand will be in a better position to decide on its expansion plans.

The franchisor should conduct a thorough investigation into the areas the brand wishes to franchise. Also analyse the best course of action.

Territory mapping should take state and union territories, languages, dialects, and many other factors into account. This is in addition to the site of the expansion.

But before that What is Franchise Territory in India?

The region a franchisee is allowed to launch and run a franchised business is known as a franchise territory. To strategically cover as much of the country as possible, franchises locate their franchisees in locations that will draw the best kind of clientele.

The franchisor is required to disclose information regarding the scope, size, and level of protection they will receive, and this is defined in the agreement between the franchisee and the franchisor.

The franchise agreement specifies the extent and boundaries of a franchise region, and each franchisor will have a different amount of protection for a franchisee operating within that territory.

How do franchise territories work in India?

How to evaluate your Franchise Territory in India?

Here are some important elements that a business owner can consider when evaluating a Franchise territory.

Understanding the franchised business and whether you will be selling goods or services from a permanent location or on the go is the first step in determining your territorial rights.

For a fixed site firm, a franchisor can grant and permit another franchisee to open another retail outlet next door or, more often, a few blocks away if the franchisor does not provide area protection. This means that for mobile enterprises, the franchisor may permit other adjacent franchisees to provide services to clients who are located in your service area.

Does territory protection have any exceptions?

Franchisers frequently have a genuine interest in “carving out” exceptions to the territory protections they give to you. You should research these carve-outs before purchasing a franchise and consider how they might affect your company.

How to determine Franchise Territory in India?

The franchise agreement specifies the extent and boundaries of a franchise region, and each franchisor will have a different amount of protection for a franchisee operating within that territory.

There are different ways to determine territories in Franchising in India.

Why is having a defined territory crucial for a franchise?

To achieve financial goals, franchisers essentially want a region with lots of room for growth. A favourable economic environment and a sizable population of clientele who can and will buy your goods and services make up a favourable market.

How to optimize your Franchise Territory in India?

Businesses can function more effectively and make better decisions if they have a good market study which is based on a location-based analysis when choosing franchisees. Capturing a potential market while a franchise is aware of it would be crucial for a first-mover advantage. If all area mapping plans are supported by data, a franchise can greatly benefit from them.

Customers must be the primary consideration when developing franchise territory mapping plans to ensure healthy and continuous growth. Each franchise has a certain set of target markets that it caters to.

Understanding the traits, tastes, and preferences also becomes crucial. Franchisees can provide efficient sales incentives because of segmentation. Potential franchisees would be given sufficient space to establish and maintain a revenue stream. This will be free from direct competition from other franchisees.

What is the role of a Franchiser in Franchise Territory Mapping?

The most typical criterion for every franchise expansion is this. Simple metrics like distance, radius, ZIP codes, population size, etc. can be used to create territories. Thus, a franchise can develop a market plan to adopt on the site that will help the franchise become successful. This is possible if it is aware of its strengths and disadvantages.

The mapping of the franchise zone must consider future sales. Also, an environment that is changing requires constant monitoring. They provide a chance you must not miss. Searching for places that can attract more customers and generate more money results in better positioning and customer accessibility. Therefore, an expansion strategy for the franchise and a recruitment plan for a local franchisee in the target area is created through territory optimization research.

By making an early investment in a franchise territory, you can increase the effectiveness of your sales. Also, ultimately accomplish your franchise expansion objectives. Creating a supply that meets both existing and potential consumer demand is the first step in successfully selling a franchise in India.

Furthermore, to increase revenue, franchisers can also opt to offer territory rights to franchisees such as:

How can Sparkleminds help in Franchise Territory Mapping in India?

Territory mapping is the process by which a company intending to start franchising constantly searches for new places to launch franchises to better understand where its target market is located and assess the ROI of the brand from that specific region.

When a brand decides to map out its territory in a certain city or region, there are a few elements to be aware of.  It’s not as simple as it sounds to map out a franchise territory for entry in India; you need guidance from an expert.  With over 20 years of experience and having helped over 1000+ firms develop their brands across India, Sparkleminds is your one-stop shop for all of your franchise territory mapping needs.