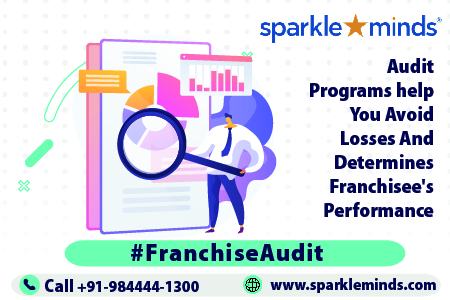 It is very essential for any franchise system to have a very well defined franchise audit program in place. At sparkleminds, we lay emphasis on designing a comprehensive audit plan. A systemized and structured franchising is developed.

We take a 3-step approach to designing an audit plan:

Typically, all processes from the selection of franchisees to remittances of royalties, functioning with adherence to the operation manuals to the annual recognition of franchisees that have performed well from an audit perspective are drawn. We could relate this to a diagnostic test outline.

Each outline must have a clear measurable way of testing the results including statutory filings. Along with the other mandatory and voluntary submissions which franchisees make or are asked to make. This could be the actual testing process.

Hence, it’s just not about measuring if the franchisee is under-reporting the sales or is remitting lower royalties but covers the entire functionality in a far more comprehensive manner. These audits would also include expected gross profits and emphasize on operational expenses, employee’s cost and other areas at unit levels; hence franchise audit requirements are very much needed in the franchise ecosystem Thus and hence not every franchisee may be able to control or monitor. Hence, the franchisee is given clear guidelines. To improve profitability from these audits. It works to the advantage of the franchisee business in question.

Franchise audits also have to provision for destroyed records or at times very little co-operation from a few franchises. In most franchise systems, putting a franchisee to an audit check notice is relatively difficult. If we consider the honest and compliant franchisees; the procedure of auditing will be faster. The most efficient manner and ensure that everybody in the system is on the same platform. The non-compliant franchisees are always bleeding the system in one way or the other. Franchise audit reviews ensures that the franchise is systemized in an orderly manner and the franchises are following the manuals and systems are kept in place.

Hence it is ensured that such franchisees are dealt with firmly through the audit mechanism (provided the franchise agreement is in sync with the actions the franchisors can take. The honest franchisees incentivized for adding value to the system.

We also bear in mind greatly that any franchise audit process should ensure key metrics are achieved. At the end of the exercise, it adds to the profitability in one way or the other. Many franchisors also penalize the franchisee for crossing the lines drawn by the audit outlines. Franchise auditor helps in this aspect. Beyond which the costs of audits are to be borne by them. The franchise audit financial statement acts as an evidence to both parties with respect to the performance and evaluation. Benefits received through a proper audit always outweigh the costs that the franchisor incurs. It must. As franchising becomes competitive and the need for proper coordination between the franchisor and franchisee is inevitable, regular on the field audits.

Therefore, it would be a pre-requisite for any successful franchise program. Thus, make your franchise system more efficient and compliant. Therefore, contact our senior franchise consultant for a more detailed discussion on how we can help you franchise better through the audit mechanism.