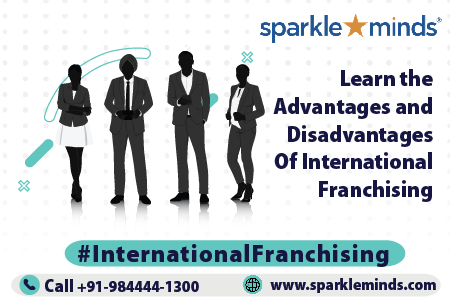 I) Minimum Risk – Relatively lower risk to the franchise, as it’s already been set up in the home country and has been performing well, is likely to perform well in a foreign location as well. The franchise business is time-tested and with a proven business model, which reduces risk to a larger extent.

II) Competitive Edge – This refers to the brand having a competitive edge over others as the brand already has a time-tested model in place. The brand is known nationally and internationally. It is a set business market and may now have to spend a lot of money on marketing the brand at a foreign location.

III) Guidance and Support – The franchisor is usually seen giving all the necessary guidance and support to the franchisee in order to help them explore the international markets and set up their franchise.

IV) Previous Experience – It is really not important for the franchisee to have any previous knowledge, as the franchisor will provide all the needed guidance and support to establish the brand internationally.

Now let’s have a look at International Franchising Disadvantages

I) Lack of Independence – This is one of the largest drawbacks of franchising, the franchisee is bound to adhere to the pre-defined/ mentioned rules and regulations of the franchise business. The lack of independence also includes:

III) Franchisor Monitoring – Though franchise monitoring is good at the initial stages of the franchise, after a point of time it turns out to be a problem for the franchisee. For the fact that the franchisor has to be contacted for every change made in the business and approval is needed for the same.

V) Share in Profits – The franchisee for a long time will have to keep on paying the franchisor a part of the sales as royalty, they make at the franchise. Which could be in large amounts than the profits the franchisee will receive in return.

International Franchising Advantages and disadvantages are to be measured carefully. Every form of business has its pros and cons attached to it, but the franchise is still one of the best ways to start a business in any given segment.